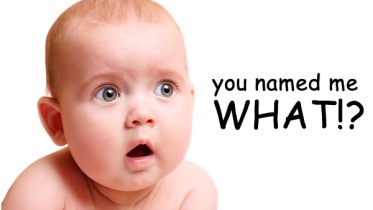 In 2014, when my wife and I went to the hospital to have our first child, we were all packed up and as prepared to go as we could possibly be. Living just a few blocks from the hospital, the option was available for me to swing home, with ease, if needed. But, nonetheless, the bags that would accompany us sat, packed in our spare bedroom, for the better part of two weeks. However, as prepared as we were with packing, we were equally unprepared in another major part of this whole baby having process…what the hell would we name the baby??? As there are few surprises in life, we chose not to find out the sex, though everyone assured us we were having a boy. So, needing both a girl and boy name, over several months we periodically looked up lists of baby names and talked about which ones we liked or didn’t like, but never seemed to gain much ground. Finally, the day was here and as we rushed out the door, our list was still incomplete, consisting of a single maybe for a girl name and exactly zero boy names. Well, as it turns out, we wound up having a beautiful baby girl and our maybe name, Ruby, seemed to fit her perfectly. Whew, crisis averted!!

Now, as 2017 comes to an end and we usher in 2018, we are expecting our second child in just over three weeks. And here we are sitting in the same situation. Once again, not wanting to find out the sex, this time we’ve been able to muster up one boy name, but zero girl names!! So, how does any of this pertain to Tableau and/or Data Visualization? Funny you should ask… 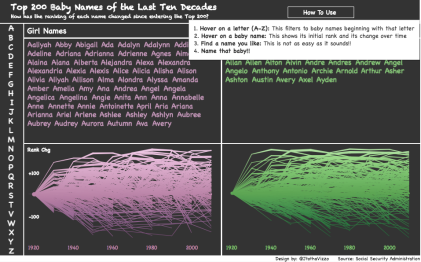 After going through the same song and dance we went through in 2014, I decided to leverage my passion for Tableau and Data Viz as a new way to approach searching for baby names. Having lost track of how many times I’ve Google searched phrases including “baby names,” it seemed only right to try and make the process more simple and fun. Eventually, I landed on the Social Security Administration website, where I was able to find data on the top baby names, by decade. After narrowing down my list to go back only to the 1920s, as opposed to the 1880s, I began gathering the data.

How Can it Help?

The process of picking out baby names may be easy for some, but very difficult for others. For us, it has been the latter for a few reasons that I won’t go into. Either way, in our situation, my wife and I both tend to stay away from the ultra popular names of today, as we prefer classic names that are beginning to come back in a small way, especially for girls. This is how we landed on Ruby, which also happened to have some meaning to us. So, with these thoughts in mind, I wanted to trend the popularity of baby names over time and use that to determine if the criteria are met for a specific name.

How Does it Work?

Dating back to the 1920s, a lot of names have landed in the Top 200 most popular baby names for a given decade. So, with so many names to weed through, I needed a way to filter down the options of what was viewable at a particular time. Thus, the viz is basically useless without the first of three dashboard actions;

Once your name is highlighted in the line chart, you will see its initial Top 200 Rank, as well as all subsequent ranks, allowing you to easily see if the name has increased or decreased in popularity. Here’s a quick example; Although the spelling is different, the name Brittany entered the Top 200 in the 1980s, ranking #21 among girl names. By the 1990s it had climbed to #7. And then in the late 1990s, Britney Spears  became a thing and by the 2000s the popularity of the name Brittany had plummeted to #189. Coincidence? You be the judge.

My hopes are that this viz can be helpful in several different ways, regardless if you like popular names, classic names or anything in between. Thank you for reading, now GO NAME THAT BABY!!